Living in Ohio, it’s hard to golf when the temperature is below 50 degrees. We have golfed when it was 45 degrees out, but most places aren’t open. We do have a nearby outdoor heated driving range, and a few indoor simulators that are absolutely gorgeous. With prices on simulators falling and the technology improving, almost every driving range and every local club has installed an indoor simulator. In fact, some places are stand alone indoor simulators, with no outdoor golf course attached. Pretty awesome!

We have a large indoor testing facility that we use to test and store most of sports equipment. Part of our facility is set up as a baseball batting cage and another section is a large video recording studio with a white sheet in the background.

We were rarely using our video recording studio, so what if we put some netting around the white sheet an converted it into an indoor driving range? 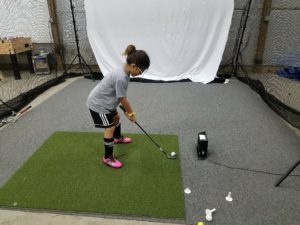 So we did. We went out and bought some netting and created an indoor driving range. We already had a green mat, so it was rather easy to do. We can still shoot videos in there if we want. Pictured, click for full resolution.

We would hit balls frequently and it was a lot of fun. Then one day on Facebook, a friend posted a picture of his son in his garage hitting balls into a net with a little launch monitor on the floor. It looked really easy to do. We chatted back and forth. He sent me pictures of the software and we talked on the phone. He had been using a Skytrak unit. He loved it, and it gave him options to use indoors during the cold winters in Iowa. Plus, his kid was really good and this was a fun way to motivate him to do even better.

Since I had an old computer in storage, I began thinking. What if I could set that up and connect a launch monitor?

The wheels in my head started churning and I started researching home golf launch monitors and simulators. As you can imagine, they can get quite pricey. We didn’t want to buy the cheaper toy like models, but we also did not want to spend $45,000 on the top of the line simulators either. The only two we were really considering were the Foresight GC2 and the Skytrak model.

One thing to note about the aboutGolf simulators, is that their graphics are a bit cartoonish and a little too plain. We had demoed them extensively locally, since their headquarters is here in Perrysburg, Ohio. We do love their technology and it’s probably top of the line, with a price to match. So we were going to get a GC2 or Skytrak.

Our research department took to the internet. Calling both manufacturers and asking hundreds of questions. Both were very responsive and very happy to answer our questions and both wanted to make the sale.

We looked at research articles and YouTube videos comparing the two side by side on identical shots. Both launch monitors recorded nearly identical data on the same shots. They were within a fraction of a percent of each other. The build quality on the GC2 was more robust, with actual glass lenses, but the Skytrak accomplished the same goals with slightly cheaper materials.

We ultimately ended up purchasing the Skytrak unit because the GC2 was three times the cost, and because there was a refurbished unit that was heavily discounted coming straight from Skytrak. The refurbished model was not recording any shots. It would record 1 out of every 100 or so shots. We sent it back, they “fixed” it. It still didn’t work, maybe even got worse. We called customer service again, eventually the CEO called and talked to me and we were sent a brand new unit that was working perfectly. It’s been a love affair since.

We have access to a GC2, and placed it next to the Skytrak and verified the numbers ourselves. The spins, launch angles, side spin, distance carried, and flight trajectory were exactly the same. We just couldn’t justify spending three times as much. After all, we aren’t professional golfers. We are just weekend golfers and parent-coaches with some kids that love to play sports.

The Skytrak has a number of interesting features. You can use it as a driving range launch monitor. for alot more details about 5 euro casino bonus ohne einzahlung. You can just fire shots and it records all of them for you. It then gives you averages of all the data it collected. You can tell it which club you are hitting, so that it can save that data to that specific club. So you know that you normally hit your 7 iron a total of 156 yards, with 7600 back spin, 300 side spin, your average launch angle, average club head speed, ball speed, smash factor, and that it carries 143 yards through the air, then lands and goes the additional yardage. It’s really nice to see these figures.

There are also games you can play if you don’t want to use the driving range feature. There is a closest to the pin contest that you can play by yourself, or with others. There are target contests that you can try to hit and a few other fun games.

One feature we especially like is the “Map My Bag” feature. You tell Skytrak which clubs are in your bag, then tell it how many shots you will take with each club and it goes through and calculates about how far you hit each club. Then it maps it out for you and you can see what gaps you have in your current bag. It does this in an automated way. You don’t have to interact with the computer once you’ve set it up. For example, you hit 5 shots with your driver, it automatically then goes to your 3 iron, and so on. Very intuitive. If you hit a really bad shot you can go to the computer and have it delete that one and retake it. We found that ten shots with each club gave us the best results and more accurate averages.

Those are the features we have used the most. But there’s more!

Another incredible feature is the various real golf simulators you can use with it. We researched these heavily and ultimately settled on The Golf Club simulator. It has incredible, scalable graphics, realistic golf courses, excellent and realistic game play, and tons of features and conditions that you can set up. It also has multi player mode that you can play with friends, or online with other people. It’s just an amazing piece of software. We have found the game to be quite difficult and unforgiving. You will score a lot of 8s and 9s until you settle down and figure it out. the graphics are just gorgeous though. There isn’t a more realistic looking golf simulator even in the most expensive golf simulators.

Putting with The Golf Club is hit or miss, but once we figured out the stroke that it can detect properly, it worked much better. We would have to putt 5 times before it finally recorded a putt. So in that sense, the putting isn’t realistic, but it isn’t realistic for any of the golf simulators. It’s really a matter of the Skytrak technology not being able to detect putts very well. We highly recommend practicing your putting on a putting green. The newer updates to Skytrak are supposed to resolve this issue.

There are some issues with Skytrak detecting wedge shots, especially higher lofted wedges. If you turn off the Skytrak, then turn it back on, that seems to solve the problem. But it’s a known issue that they have been working on. For the most part, it detected 80% of our wedge shots without issues. This is good enough. The GC2 had similar issues.

The Golf Club game has over 150,000 golf courses to choose from, and you can add your own. You can use the course designer to add your own course and it’s really fun. Palm trees in Ohio? Yes, you can! We really liked the expandability and it all comes with it. Some of the other simulators only give you access to 4-5 courses and then you have to pay for more.

The Golf Club is quite expensive. You can pay annually or a one time fee. You can also wait till there is a $200 off coupon to get the best deal. It’s an incredible program and you won’t regret it.

The Skytrak can connect to an iPad or Android Tablet via wifi or to a computer via USB cable. The Skytrak has an internal battery, so you can take it to the range and watch your shots on your phone. The battery lasts forever, and we haven’t had issues with it.

We also highly recommend the metal case to protect your unit. This probably isn’t necessary if you are a decent hitter. But if you have kids or occasionally top or toe the ball, you really need this. They will fix it if you hit it, but just get the case so you don’t have any downtime when you have to send it back for repair.

Overall, the Skytrak is an outstanding piece of equipment to add to your indoor range.

In one word, the Skytrak launch monitor and simulator is just outstanding. we have never been so impressed by a product as we are by this affordable, portable, and simple to use monitor.

Below are some pictures from The Golf Club Game, the Skytrak Driving Range and our indoor setup. Click on the pictures for a full resolution image. 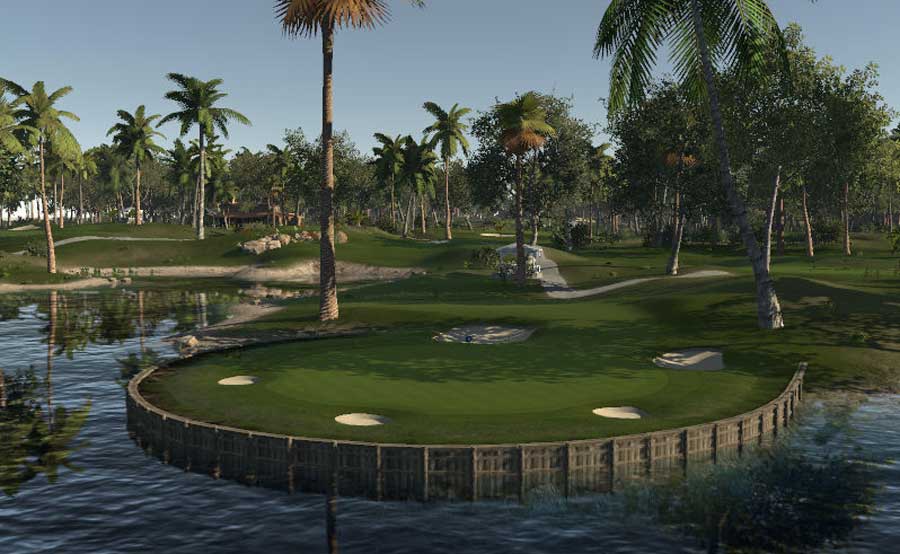 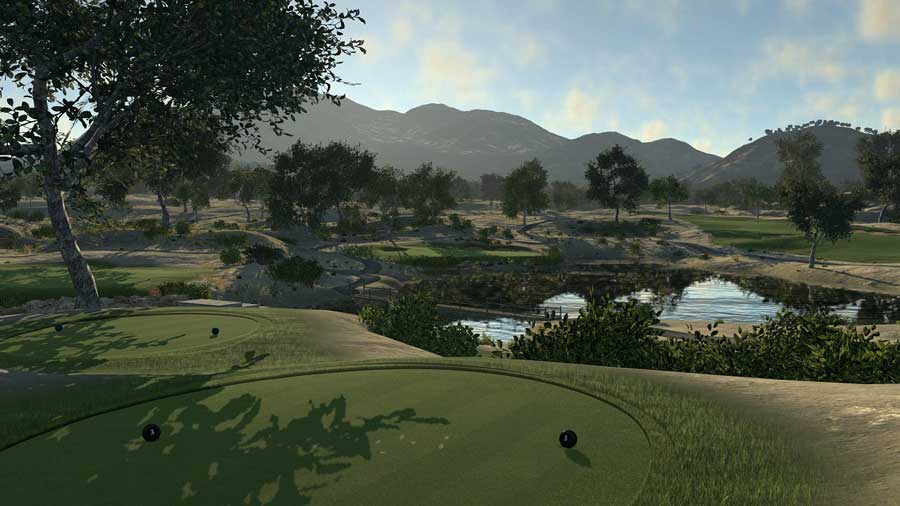 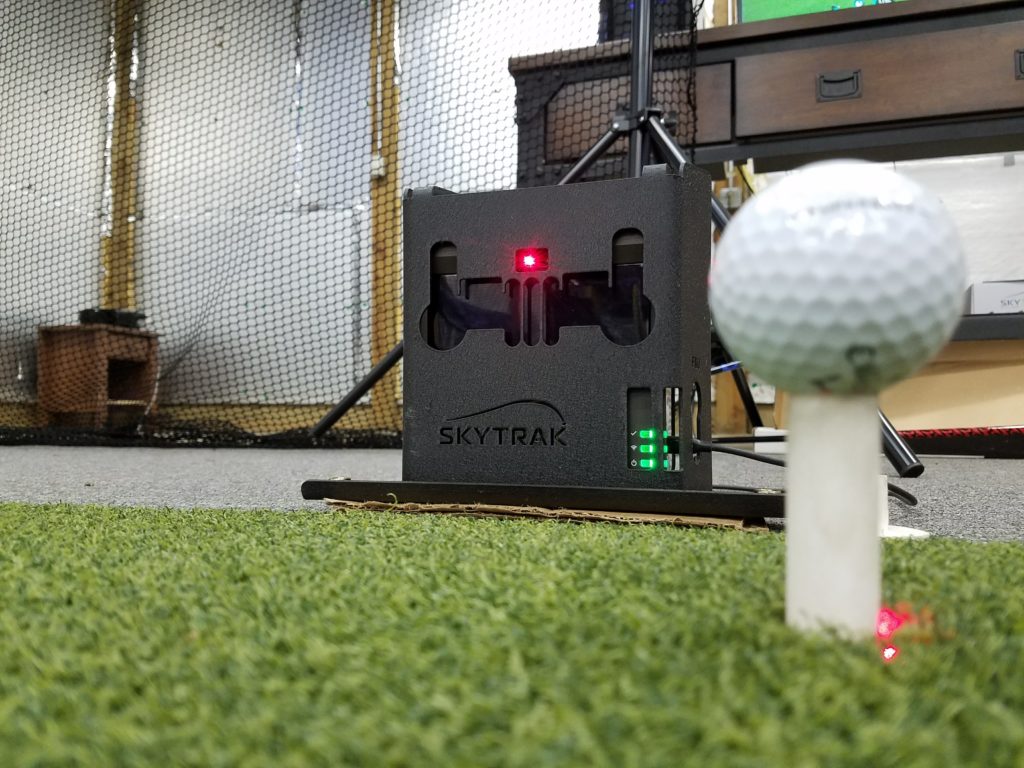 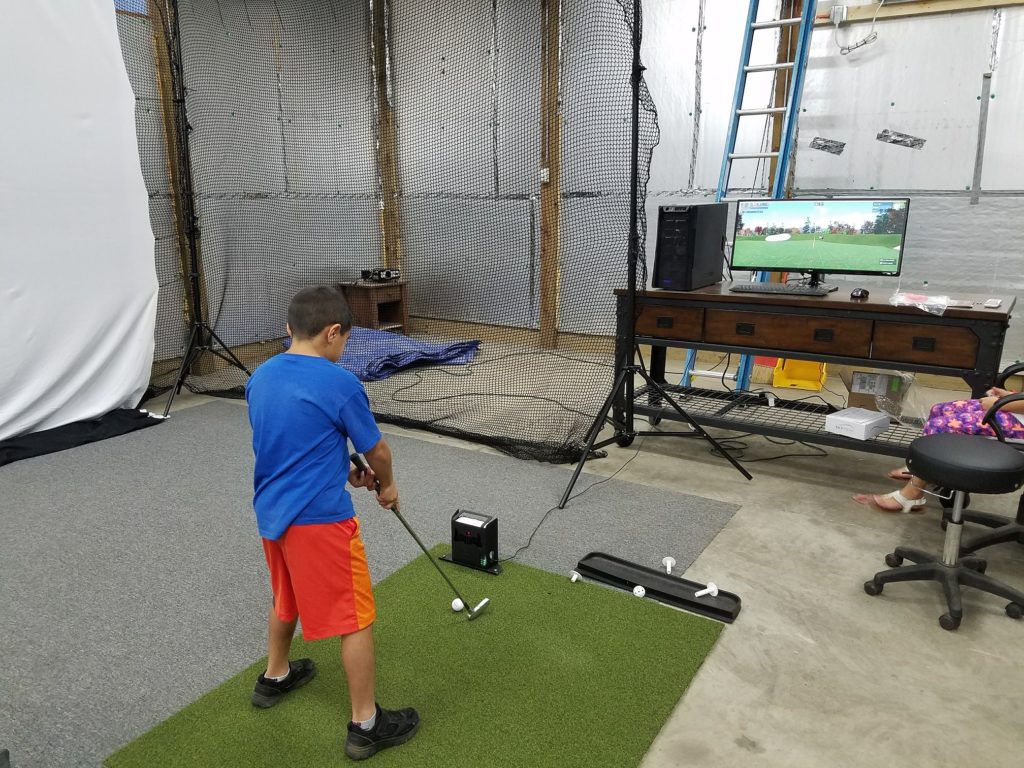 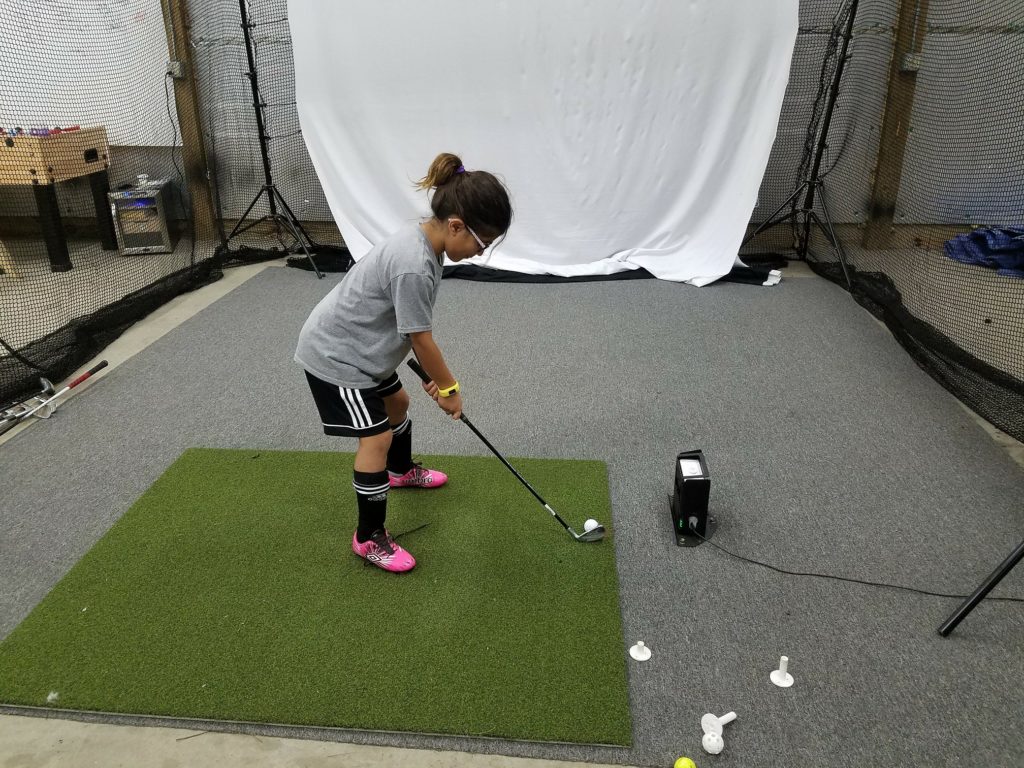